For Angela Carter, literature had the power to upend the fictions that regulate our world.

By Namara Smith (from The Nation) 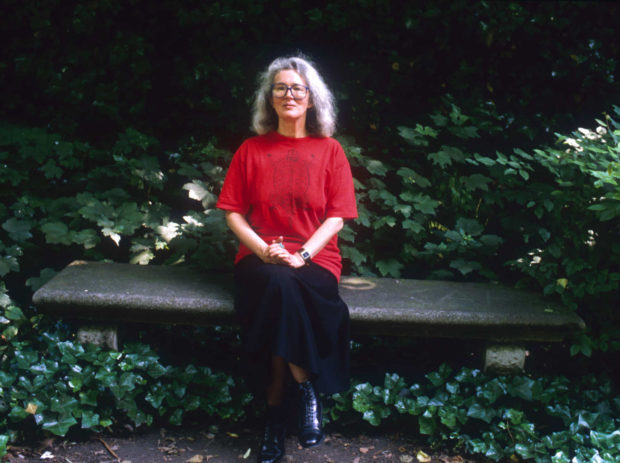 The title story in Angela Carter’s The Bloody Chamber, the collection of reimagined fairy tales that contains her best-known work, is based on the legend of Bluebeard. Carter updates the story’s setting to the late 19th century—the widowed husband smokes Cuban cigars, the young wife wears a Poiret shift to dinner—but otherwise retains its traditional contours. The familiar plot unfolds with a sense of inevitability, as if every action were preordained. The heroine drifts through the story like a sleepwalker, hypnotized by her husband’s “heavy, fleshy composure,” the rhythmic motion of the train that carries her to his castle in Brittany, the scent of the lilies that fill her bridal suite. Even when she discovers the bodies of his previous wives laid out in a gruesome tableau and it becomes clear that she is his next victim, the mood remains dreamlike.

The spell isn’t broken until the story’s final pages. In the 17-century version of the fairy tale by Charles Perrault, the bride is saved by her brothers-in-law; in Carter’s, it’s her mother, a military widow who comes galloping up the causeway, armed and dangerous, just as the killer is about to cut off the young wife’s head. Carter narrates his reaction with a typical flourish: “The puppet master, open-mouthed, wide-eyed, impotent at the last, saw his dolls break free of their strings, abandon the rituals he had ordained for them since time began and start to live for themselves; the king, aghast, witnesses the revolt of his pawns.” His authority shattered, the husband is reduced to “one of those clockwork tableaux of Bluebeard that you see in glass cases at fairs.”

Variations on this scene—the moment when the strings are cut and a familiar story suddenly veers off course—recur throughout Carter’s fiction. The strongest emotions in her work are elicited by the prospect of a leap into the unknown, the event that could not be predicted or controlled. Unlike many writers shaped by the upheaval of the 1960s, Carter never disavowed the politics of that period or treated them as a temporary madness; she remained committed, throughout her life, to the possibility of radical change. Her novels tend to conclude with either a wild party, an act of violent destruction, or a combination of the two. Although her fiction drew heavily on traditional folklore, she saw herself as being in “the demythologizing business.” Myths, Carter asserted, are “extraordinary lies designed to make people unfree,” and she adopted their conventions in order to blow them up. At the end of her second book, The Magic Toyshop, a Gothic reworking of Paradise Lost, the two main characters look at each other “in a wild surmise” as their house burns to the ground. “Nothing is left but us,” the heroine says. She doesn’t seem unhappy about it.

As Edmund Gordon emphasizes in his new biography, The Invention of Angela Carter, the allure of remaking oneself remained a constant throughout her life. Her notebooks and letters are filled with plans for self-improvement projects: to learn Gaelic as well as “the French they speak in France”; to work out how to “live off the land”; to dye her hair a different color; to redo the kitchen. Carter was enthralled by fashion, particularly its potential to antagonize others. At her first job—reporting for a local newspaper—she wore green lipstick until her colleagues complained. Decades later, when she bought her first house, she painted the outside blood red.

In the journal she kept as a young woman, Carter wrote a sentence from André Breton’s First Surrealist Manifesto over and over: “The marvellous alone is beautiful. The MARVELLOUS alone is beautiful. The marvellous ALONE is beautiful.” She loved storms, pyrotechnics, circuses. When she was 30, she moved to Tokyo to live with a Japanese man she had met and fallen in love with six months earlier. Two years later, after the relationship dissolved (she’d found another woman’s lipstick on his underwear), she returned to London alone. Carter knew they weren’t compatible, she told a friend, when she made him take her to a fireworks display and he was bored by it. Who could be bored by fireworks? (read the full review at The Nation)